1. Small description of the problem

The game is played in a zone 16000 units wide by 9000 units high (the top‑left point is 0 0). You control a man named Wolff. Wolff must defend a given number of data points from a given number of enemies that are placed across the game zone.

The basic commands of Wolff are:

Attempting to shoot an enemy who is already dead or does not exist will cause a game over. You score zero points.

If Wolff comes within 2000 units of any enemy, he is killed by the enemy, and you lose the game. You score zero points.

The complete description of the problem can be seen at the end of The Accountant report.

In essence, this is an optimization problem where you have to get the maximum score within a response time per game turn <= 100ms.

GAs are commonly used to generate high-quality solutions to optimization and search problems by relying on bio-inspired operators such as selection, mutation and crossover. Essentially, GA replicate the way in which life uses evolution to find solutions to real world problems, such as, search through different combinations of materials to find the perfect final product (mirrors designed to funnel sunlight to a solar collector [1] or antennae designed to pick up radio signals in space[2]); design of computer algorithms (walking methods for computer figures[3]); schedule tasks, and to solve global optimization problems.

GA takes the fundamental properties of natural selection and apply them to the problem we are trying to solve. The basic process for a GA is described in the following figure: 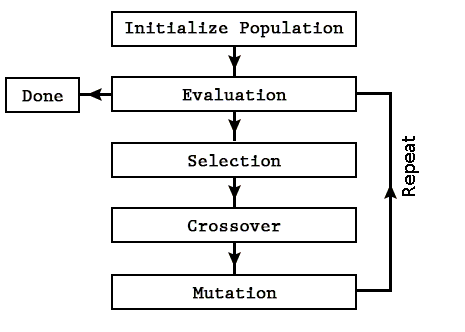 The limitations of an GA are that we can never know if we achieve the optimal solution. Thereby, we are often never able to guarantee that our GA has found the global optimum solution to our problem.

3. Creating the Genetic Algorithm for the accountant problem

For the GA I created the next set of clases:

The complete source code can be downloaded from my GitHub. I am not proud of my code. I think I can do it better, but I did it in five days.

Another user of Codingames also implemented a solution using GA, his solution can be downloaded here.

This contest was a lot of fun. I think 2 weeks is so much time for this kind of contest.

Things that I did not consider:

Please, don't forget to give your comments !!