The Trie is an ordered tree data structure used usually to store strings, in which case each node defines an association with a letter of the alphabet. Unlike a binary search tree, no node in the tree stores the key associated with that node; instead, its position in the tree defines the key with which it is associated. 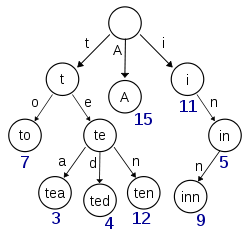 The best way to understand this data structure is with an example. The above example shows a trie for the complete English words: "A","to", "tea", "ted", "ten", "i", "in", and "inn". The English words are listed in the nodes. Each complete English word has an arbitrary integer value associated with it, e.g. "ten" has the value 12. The value can used to identify if the node is a leaf node or to indicate the index position of the information related to the English word in another array. Thus, the Trie can be used as a fast search data structure.

As we can see in the Table, in the best and worst cases the space complexity is O(k*n), where k is the alphabet size and n is the total number of nodes, which in practice is sometime unaffordable. Thereby, the Trie needs a total of k*n pointers. For the three operations (search, insert and delete), the time complexity of the Trie in the best case is constant (1) and in the average and worst cases is L, where L is the size of the input string for the operation.

Please, feel free to give me your comments :)