The algorithm to generate a TRPG without numeric variable is the next: 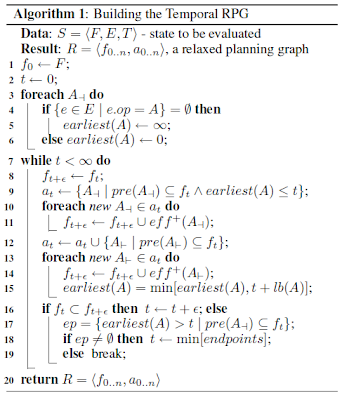 Where F is a state, E is an ordered list of ongoing actions, actions that have started but not yet finished, and T is a collection of temporal constraints over the actions in the relaxed plan. Each e in E is a tuple where:

[1] Description of a TRPG: The first fact layer corresponds to the state being evaluated.Following this are timestamped action and fact layers, with action layers containing both start and end actions and fact layers their (positive) effects.

The durations of actions are used to offset start and end points between fact layers in order to capture the temporal relationships between the starts and ends of actions.

If a start action Astart appears at layer t in the planning graph, its end is delayed until layer t+dur-min(A). This is the earliest point at which the end could be applied, given that it has to follow the start.

For each action that started before the current state (ongoing action) but has not yet finished, the TRPG maintains an upper bound on the elapsed time since the start. The corresponding end action is delayed until the layer timestamped with the minimum duration of the action minus that bound.

The TRPG also contains bounds estimates for numeric variables, mantained and used in the same way as Metrics-FF.

A TILs is encoded as effects in a dummy TIL action, that should be executed at each time point, and can be added to the relaxed plan.